Sweet, sticky and sugary-scented, honey is an item that just about everybody has in their kitchen cupboard.

However, did you know that this natural ingredient has some amazing skin benefits too? This is the reason why you are starting to see honey being featured in an increasing number of skin care products, with this being an ingredient that works so well for all skin types.

Honey acts as a humectant, which gives it strong moisturizing properties.

Wondering what a humecant is?

There are several other humectants commonly used in skin care, such as:

So, what makes honey better than these?

Well, in addition to drawing moisture to the surface of the skin, which is what other humectants do as well, the enzymes within honey enable it to penetrate quite deep into the skin. This means that it is able to take its moisture-retaining properties into your skin’s deeper layers, where other humectants often cannot reach.

Another reason why honey is so effective at moisturizing the skin is because it also contains emollient properties.

Emollients are another type of ingredient frequently used in moisturizers. They basically form a thin, protective layer over the surface of the skin. This not only prevents the skin’s moisture from evaporating into the air, but also stops allergens, impurities and other toxins from entering into the skin.

The Anti-Acne Effects of Honey

With acne being the most common skin condition to affect people in the USA, it is hardly surprising that the number of anti-acne treatments is steadily on the rise.

Unfortunately, many of these contain harsh chemicals that you don’t really want to be using on your skin in the long run.

This is where honey comes in…

It was early in the 20th century when researchers first began to properly look into the antibacterial properties of honey. However, not too long after this, antibiotics were developed, which led to a decline in honey-related research.

Now that antibiotic resistance has become such a common problem, researchers are once again taking a closer look into how honey could help when it comes to fighting bacteria.

Wondering what they have discovered?

That honey contains an enzyme that creates hydrogen peroxide, and this is what gives it its antibacterial effects. Not only is it able to kill a variety of different types of bacteria, but it also prevents bacteria from forming and growing in the first place.

How does this relate to acne?

Because acne is caused by bacteria – propionibacterium acnes to be specific. 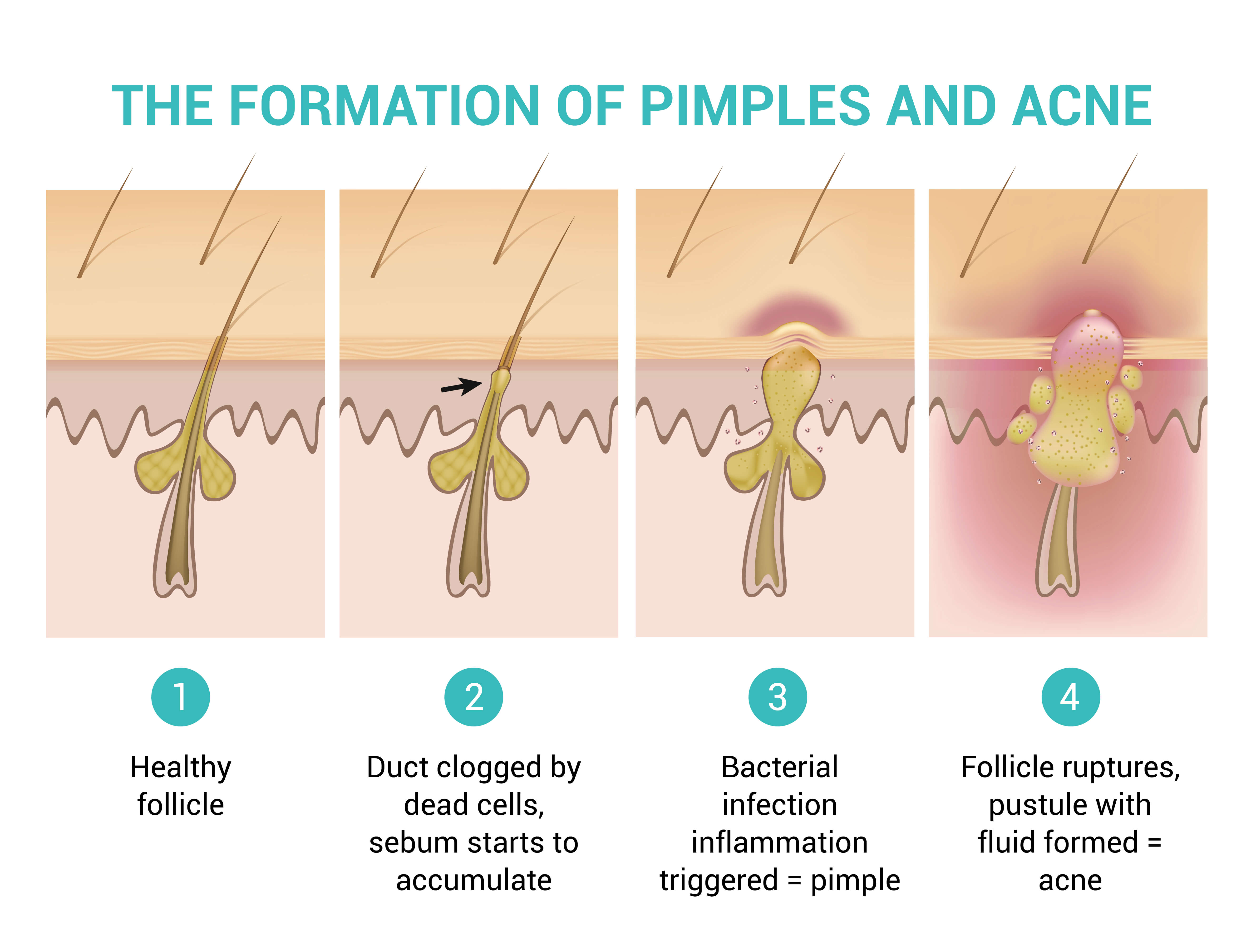 When applied to the skin, honey is able to destroy this bacteria, therefore clearing and preventing breakouts.

The anti-inflammatory properties of honey help with this too. Inflammation in the pores quickly leads to breakouts. Therefore, reducing and preventing this inflammation will go a long way in keeping your skin clear.

Honey as an Anti-Aging Ingredient

In addition to being able to help with dry skin as well as oily skin, honey is an ingredient that works well on aging skin too.

To understand how, you first need to know why the skin ages…

There are several different factors that contribute to skin aging, but one of the biggest is free radicals.

What are free radicals?

They are unstable atoms. Every healthy atom in your body features pairs of electrons. Free radicals, on the other hand, are missing an electron. In order to heal themselves, free radicals scavenge other cells in the body and skin, trying to steal an electron from them. This causes so much damage, not only to the outer structure of the cells themselves, but also to the proteins and DNA within them.

The proteins in your skin cells, such as collagen and elastin, are responsible for keeping your skin firm, tight and smooth. When free radicals damage these, the results are fine lines, wrinkles, sagging skin and dark spots.

What causes free radicals in the first place?

So many different things, from sun exposure to pollution to processed foods. Yes, there are ways in which you can prevent some of these free radicals from forming in your body, but completely avoiding them is next-to-impossible.

How does honey help with all of this?

Honey is packed with antioxidants, and antioxidants are the most effective way to clear your body of free radicals. Antioxidants contain a number of spare electrons, which they then donate to free radicals whenever they come across one. This neutralizes the free radicals, turning them back into healthy, stable atoms.

Does all honey contain antioxidants?

A few examples of darker colored honeys include:

While many find that these honeys taste much more pungent than lighter colored honeys, the taste doesn’t really matter when you are going to be using the honey topically on your skin!

So, neutralizing the free radicals in your body is key when it comes to slowing down the aging process, but is there a way in which honey can reverse any of the aging changes that have already taken place in the skin?

Yes, there actually is!

Not only do the antioxidants in honey help to neutralize harmful free radicals, but they also promote the production of collagen and elastin. As mentioned above, these two proteins are vital when it comes to your skin’s smoothness and firmness. While your body does produce both of these proteins itself, the amount that it produces declines rapidly with age.

Boosting your levels of collagen and elastin back up will help to give your skin a much more youthful appearance.

The moisturizing properties of honey also come into play here…

Keeping the skin well-moisturized is important when it comes to reducing the appearance of fine lines and wrinkles. Adequate moisture also means that skin cells are able to properly function, especially when it comes to healing and the creation of fresh new skin cells.

The Cleansing and Exfoliating Properties of Honey

Cleansing and exfoliating are both so important when it comes to healthy skin.

Cleansing is something that should be done on a daily basis, preferably in the evenings. This will then clear away the dead skin cells, dirt and excess oil that have built up on the surface of your skin throughout the day. Leaving these to remain would only result in the formation of free radicals, while also blocking other skin care ingredients from properly penetrating into the skin’s layers.

Honey has been found to be a very effective cleansing agent, which is why you will now see this ingredient being incorporated into a wide range of facial cleansers.

How does honey cleanse the skin?

It is able to delve deep down into the pores, using its antiseptic and antibacterial properties to destroy any bacteria. It clears the pores out of any impurities, and also tightens the pore openings to give you a much smoother complexion.

You can also find honey in soaps and shower gels, as it’s not only good for the face, but also for the body!

Well, honey isn’t an abrasive ingredient, meaning that it does not provide the skin with physical exfoliation.

However, honey does contain small amounts of a few different alpha-hydroxy acids, which is the same type of acid used for chemical exfoliation.

When you apply honey onto your skin, the acids within it dissolve away the glue-like substance that holds dead skin cells onto the surface of the skin. This then allows the dead skin cells to be easily washed away.

Of course, this exfoliating effect is quite mild, but that isn’t necessarily a bad thing. Its gentle nature means that even those with sensitive skin will be able to use honey as an exfoliant.

Honey as a Skin Lightener and Brightener

Do you have any scars that you have been trying to fade?

Honey could help with this…

Thanks to the way in which honey speeds up the rate at which the skin heals. Its antioxidants also help to better repair damage, and the same applies to its anti-inflammatory properties.

This comes down to the enzymes and acids in honey – the same ones that enable honey to work as an exfoliant. These clear away debris from the surface of the skin, giving you a much brighter and more radiant complexion.

Honey Works as a Hair Care Ingredient Too

You’re probably now convinced that your skin would benefit from the use of honey, but don’t forget about your hair either!

The same properties that honey has when used on the skin, from its moisturizing effects to its antioxidants, all help to nourish the hair as well.

Honey works especially well when incorporated into conditioners, keeping your locks smooth, shiny and healthy. It softens the hair and gives it a natural bounce, without weighing it down.

The Different Types of Honey

If you already buy honey to eat, then you are likely well aware of the many different types of honey out there.

It has already been touched upon that the darker-colored honeys tend to be more beneficial when it comes to skin care, mostly because it has a much higher antioxidant content.

However, one other thing to keep in mind is that raw honey is much more effective than pasteurized honey.

What exactly is the difference?

Pasteurized honey goes through a heat treatment to prolong its shelf life, meaning that the honey can then sit on a store shelf for an indefinite period of time. On the other hand, raw honey will have an official shelf life of just a few years.

While this may be the case, honey naturally has an acidic pH level, usually between 3.2 and 5. This is acidic enough to prevent most bacteria from growing, meaning that even raw honey, when stored properly, will last on your shelf for years.

Since raw honey hasn’t gone through any heat treatments, it retains much more of its potency. It does contain bacteria, but good bacteria, and these are alive in raw honey, but aren’t found in pasteurized honey. Applying this good bacteria to your skin helps to balance out your skin, enabling the good bacteria to override the bad.

How about manuka honey? 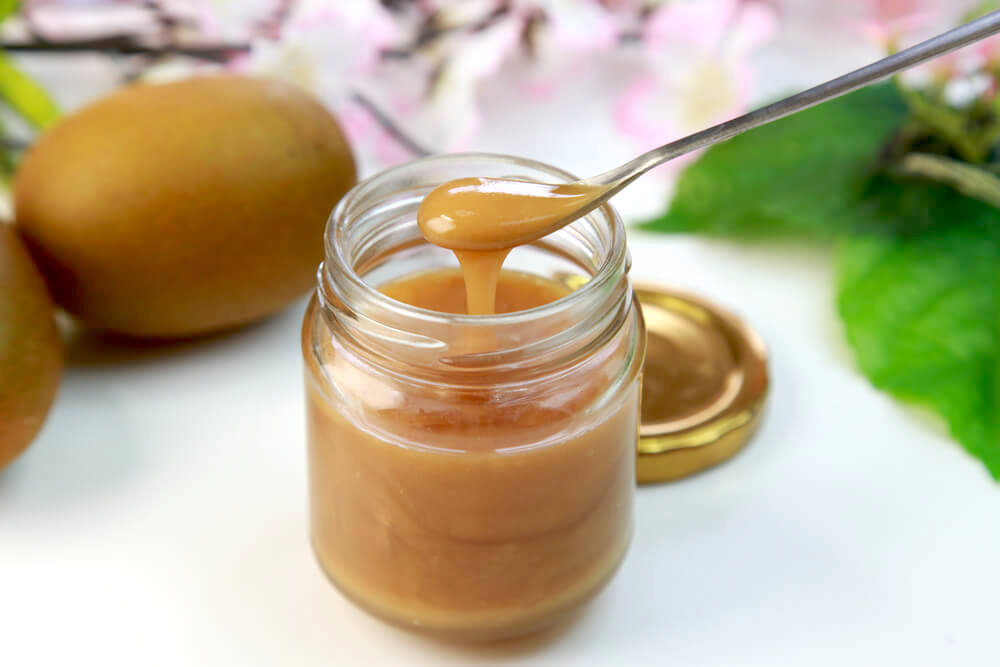 This is the honey that is particularly revered for its medicinal properties, and it does also offer extra advantages when it comes to the skin too. Research has shown that manuka honey contains much higher levels of methylglyoxal than other types of honey, which is why it is more effective when it comes to destroying viruses and bacteria.

Wondering if eating honey helps the skin as much as using it topically?

When you consume honey, compared to using it topically, it works in a slightly different way. Topical use means that your skin cells are able to directly reap the benefits of honey. On the other hand, eating it means that it passes through your body before its beneficial properties are sent to the skin.

This isn’t necessarily a bad thing, because this gives the honey a chance to clear toxins out from within your body. These toxins would have otherwise had a detrimental effect on your skin, so you may still notice a clearer and brighter complexion after consuming a quality honey on a regular basis.

Plus, consuming honey means that your body will be able to benefit in other ways too, such as:

There aren’t many ingredients out there that truly work well for all skin types, but honey is one of the few. Whether you have oily and acne-prone skin, or dry skin with fine lines and wrinkles, you will likely notice an improvement pretty quickly after you begin to use honey topically.